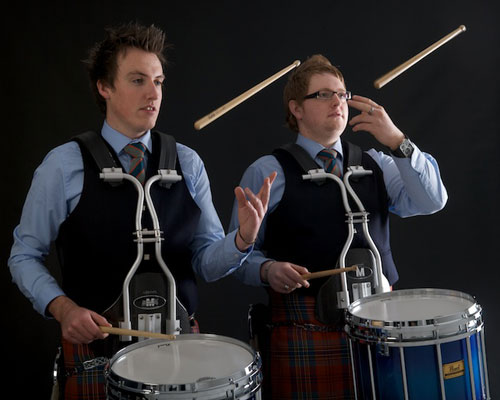 D2 Percussion is where you can be sure to find all you need to begin a successful and enjoyable learning experience in piping and drumming. Directors David Henderson and David Ross founded D2 Percussion in 2008 with an aim to create opportunities for tuition on a range of instruments at the highest standard possible and to bring the latest exciting piping and drumming products to the market.

D2 Percussion strives to deliver first class constructive learning in bagpipes, snare drum, tenor drum and bass drum. We have a roster of world-class tutors in each instrument and guarantee a great learning experience. Our online shop has a great variety of equipment and brands.

Both David’s are world champion snare drummers with Shotts and Dykehead Caledonia Pipe Band and professional percussionists with the world famous bagpipe-rock group, The Red Hot Chilli Pipers. David Henderson and David Ross are also full-time Pipe Band Drumming instructors and provide tuition for a number of councils, schools and organisation’s across Scotland. 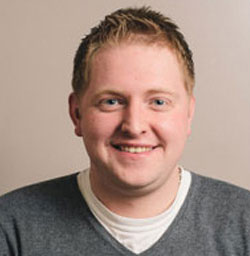 David started his drumming career at the Knightswood Novice Juvenile Pipe Band under the instruction of Alasdair Hepburn, after being taught by his father, Stuart Henderson, at their home in Glasgow. David was appointed leading drummer of the Band at the age of 13 and remained with the band for two years after that.

In 2007, David was accepted on to the Scottish Music degree course at the Royal Scottish Academy of Music and Drama (RSAMD) in Glasgow, specialising in Pipe Band Drumming and Piping. David graduated with a BA (Scottish Music) Honours Degree in 2009. This was also the year that David’s all time dream was realised; playing alongside Drum Major Jim Kilpatrick MBE in the House of Edgar – Shotts and Dykehead Pipe Band. David has won every major drumming title possible with Shotts, including the Scottish, British, European, Cowal and World Drumming Champions title in 2011. He has also won the Champion of Champions drumming title 3 times. David also travelled with the Shotts drum corps to Basel, Switzerland to play alongside the Top Secret Drum Corps as part of ‘Top Secret – The Show’ to sell out crowds. David was also part of the Shotts team that played at the opening of Live Earth in 2007 at Wembley Arena, alongside legendary rock drummers Chad Smith (Red Hot Chilli Peppers), Roger Taylor (Queen) and Taylor Hawkins (Foo Fighters).

David has also competed regularly on the Solo Drumming circuit. In 2004, David placed second in the Under 16 category at the World Solo Drumming Championships held at Bathgate Academy. He has also placed regularly at the Royal Scottish Pipe Band Association’s Glasgow and Lothian and Borders Branch contests.

David is also a percussionist with the world-renowned bagrock group, The Red Hot Chilli Pipers. David currently plays at concerts and events all over the UK and abroad.

David is also an ex-member of the National Youth Pipe Band of Scotland, where he gained huge amounts of experience playing worldwide in places such as Mexico, Spain, Italy and Ireland. 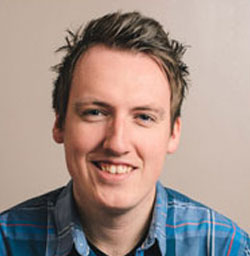 David began his drumming career in 1992 at the age of four with Inverkeithing and District Pipe Band. David then progressed to receive tuition under Mark Gibson at Burntisland and District Pipe Band. Under the direction of Mark Gibson the corps went from strength to strength winning all major titles at novice juvenile level and progressed to produce the same success at juvenile level. David then made the jump from Juvenile to Grade 2 at the age of 15 with Drambuie Kirkliston Pipe Band under the direction of Alex Dudgeon.

In 2005 David moved to Grade 1 playing under Brian Purvis at Dysart and Dundonald. David has enjoyed success in the Juvenile solo drumming circuit in Scotland, achieving 16 1st places and over 24 top 6 places. David completed his juvenile solo-drumming career in 2005 winning the World Solo Drumming Championships Under 18 level. In 2007 David Joined the Strathclyde Police Pipe Band under the direction of Eric Ward. David is currently a member of The Spirit of Scotland Pipe Band under the leadership of Jim Kilpatrick MBE.

David was also the leading drummer of the National Youth Pipe Band of Scotland and has traveled extensively all over the world playing with artists such as Carlos Nunez and Amy MacDonald. More recently, David performed with the House of Edgar Shotts and Dykehead in Basel, Switzerland, for the Top Secret Drum Corps sell-out show!